Herbs
Home » About us » Our Place » The Garden » Herbs

In 1970, The Old Medicine House was moved to Blackden. The following spring new species of plants appeared in the garden; wildflowers and herbs. Disturbed from cracks in the beams, seeds had fallen on the ground, sprouted and established themselves around the house. These were nurtured and the concept of establishing a Tudor herb garden also grew.

Whilst all the evidence suggests that The Old Medicine House was built in the sixteenth century for an apothecary, by the late 20th century no traces of its original status remained, nor were there any remains of a herb garden around it, where it stood at Wrinehill in Staffordshire. This lack of obvious remains of a herb garden on the original site gave us the freedom to create our own design.
In 2008, the Trust ran a course, examining the herb plants that would have been grown in the sixteenth century, and participants drew up designs and planting schemes for the beds. The participants at that first herb course made the inspired decision to echo the quatrefoil shape that occurs on either side of the windows of The Old Medicine House (and forms the basis of the Trust’s logo) in the layout of the beds.
During a second course, the following year, the beds were planted.

The herbs grown at Blackden

All the herbs that appeared with The Old Medicine House were moved into the beds, and others were brought in. Some have thrived in our soil, but others have not.
Those that appeared around the house included Borage, Chamomile, Feverfew, Opium Poppy and Teasel. They have now spread to other parts of the garden.
We continue to develop the herb garden, to maintain it with the help of our volunteers, and to run courses on the history and uses of herbs.
Please see the visit us pages for future dates or support us to be part of the future of the Blackden Herb Garden. 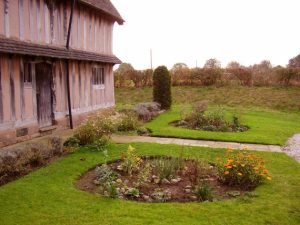 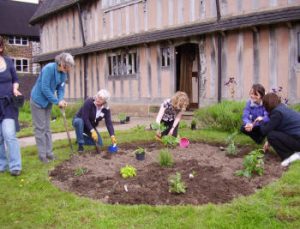